When plants are exposed to periodic environmental fluctuations, such as the seasons, they develop so-called annual rings over the course of the year. When the conditions improve for plants in the spring months, they develop large cells with thin cell walls, ensuring the transport of as much water and nutrients as possible. This wood is the light-colored portion of the growth ring and is called early wood. In the fall months, conditions gradually deteriorate again and the plant adjusts to winter dormancy. Now small cells with thickened cell walls are formed, which brings a dark wood coloration. This wood is therefore also called late wood and responsible for the visual formation of the annual ring.

With annually changing environmental conditions, growth rings of different widths are formed, which also vary between the individuals of a population.

The number of flowers and fruits formed is a measure of reproductive capacity and thus of stand development of common heather. Furthermore, it also influences the occurrence and distribution of pollinators. Given the large communities formed by Calluna vulgaris in heathland, understanding the underlying processes of individual flowering phenology can help to estimate future stand development. In turn, conclusions can be drawn regarding ecosystem productivity and resilience (the ability of an ecosystem to return to its original state after disturbance). As a result, more effective conservation landscape management can be developed and applied for the European dry heath habitat type (4030).

For the study of the annual rings, 150 individuals were sampled in 2020. Hand and thin sections were performed to determine whether the latter, very time- and cost-intensive method is absolutely necessary. It has been shown that thin sections are nonetheless essential because, on one side, there are sometimes very narrow annual rings consisting of only a few rows of cells, which are difficult to identify in hand sections. On the other hand, annual rings can also form anomalies. So-called “false annual rings” occur when poor conditions prevail during the growing season, such as the very dry summers of 2018 and 2019. The plant reacts by forming late wood. The rains that followed in the fall improved the situation again and early wood was formed once more.

Example of an annual ring series, which correlates well with the measured precipitation. In the outer area, “false tree rings” can be seen again.

The left figure shows a hand cut with, for example, three narrow outer rings. However, the thin section shows that these are “false growth rings”. The second image marks the anomalies with arrows and annual rings with lines. 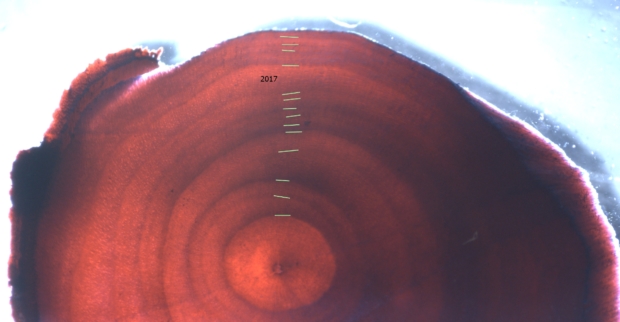 Hand cut of a Calluna sample 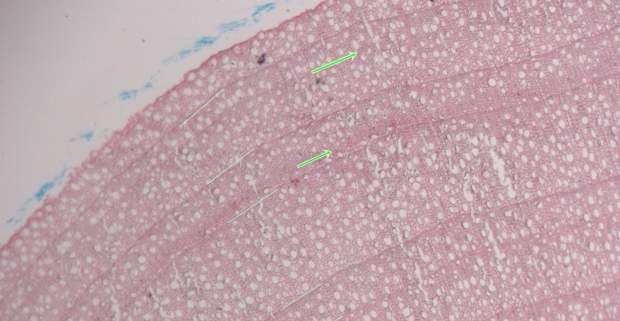 Thin section of the same sample

Further we assume that there can be different expressions of the annual rings in the plant organs. For this reason, each of the 150 plants were sampled once at the shoot, the root neck and the root. The analyses showed that the annual ring series of the different sections of a plant usually coincide.

On the left the shoot, then the root neck and on the right the root (recognizable by the missing pith in the middle). The shoot section shows only four annual rings, since the area on which the sample was taken was burned four years earlier.

Splitting the color channels makes the annual rings more visible, which helps to identify them.

Illustration of the annual ring series in the lower area. The upper curve represents the precipitation in the Kyritz-Ruppiner Heide with the critical threshold (red dashed) needed for the long-term conservation of heather.

Based on the individual annual ring series a so-called chronology is created, which can be seen on the second diagram. It shows that it interacts with the precipitation curve. This indicates that precipitation is a decisive factor for the growth of common heather.

The determination of the annual rings has not yet been completed for all individuals, which is why there are no results yet regarding the relationship with flowering phenology.

We may request cookies to be set on your device. We use cookies to let us know when you visit our websites, how you interact with us, to enrich your user experience, and to customize your relationship with our website.

Click on the different category headings to find out more. You can also change some of your preferences. Note that blocking some types of cookies may impact your experience on our websites and the services we are able to offer.

These cookies are strictly necessary to provide you with services available through our website and to use some of its features.

Because these cookies are strictly necessary to deliver the website, refusing them will have impact how our site functions. You always can block or delete cookies by changing your browser settings and force blocking all cookies on this website. But this will always prompt you to accept/refuse cookies when revisiting our site.

We fully respect if you want to refuse cookies but to avoid asking you again and again kindly allow us to store a cookie for that. You are free to opt out any time or opt in for other cookies to get a better experience. If you refuse cookies we will remove all set cookies in our domain.

We provide you with a list of stored cookies on your computer in our domain so you can check what we stored. Due to security reasons we are not able to show or modify cookies from other domains. You can check these in your browser security settings.

We also use different external services like Google Webfonts, Google Maps, and external Video providers. Since these providers may collect personal data like your IP address we allow you to block them here. Please be aware that this might heavily reduce the functionality and appearance of our site. Changes will take effect once you reload the page.