A new procedure for mapping complex habitats in satellite imagery

From September 28th to 30th, 2022, our workshop “Introduction of the Habitat Sampler” took place in Rheinsberg, Brandenburg. The opportunity was taken by 17 participants from federal and environmental agencies, universities, research institutions and several private companies in the field of GIS and environmental planning. The focus of the workshop was on the Habitat Sampler – a novel algorithm developed by Dr. Carsten Neumann at the German Research Centre for Geosciences for the stepwise delineation of habitat types and habitats in image time series. The aim was to teach the participants in using the Habitat Sampler and thus provide an innovative tool for their (nature conservation) practice as well as to discuss together about its potentials, problems and possible questions to be answered. 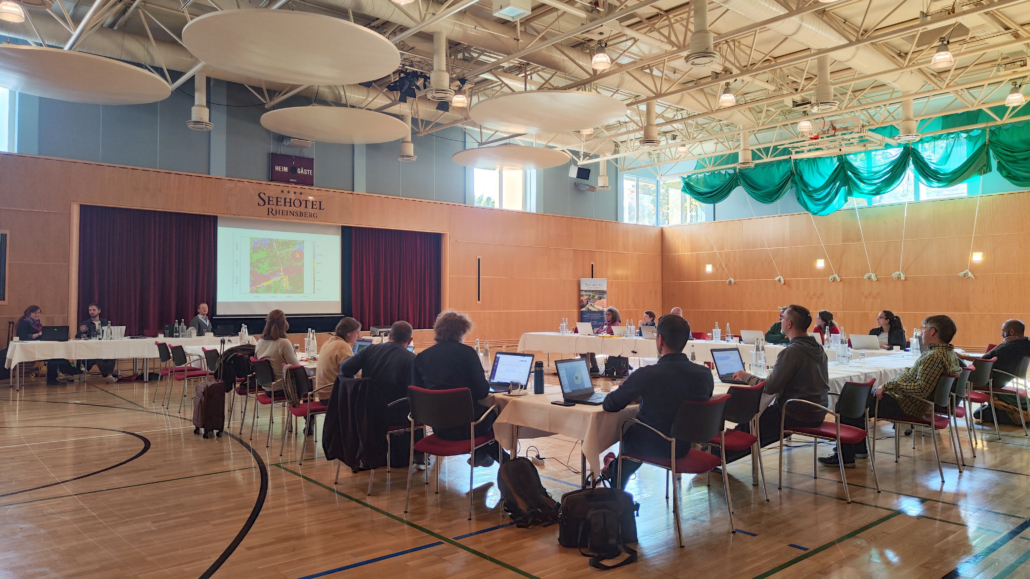 The workshop was led and organized by the Heinz Sielmann Foundation (HSS) and the German Research Centre for Geosciences (GFZ) and was accompanied by Dr. Carsten Neumann (GFZ), Irina Stockmann (HSS), Vanessa Ochlast (GFZ) and Erik Janner (HSS). The first day was mainly dedicated to theoretical basics: what remote sensing can do in the field of nature conservation and biodiversity, the kind of influence sensors of different spatial and spectral resolution have on the recognition of assessment categories, and which platforms are recommendable for downloading and visualization of free, multispectral satellite data. The Kyritz-Ruppiner Heide and the Lieberoser Heide served as examples of how satellite data and the Habitat Sampler can be used to monitor management actions, Calluna life cycles and succession stages. Later, the philosophy and functionality of the Habitat Sampler was explained and the difference to classical machine learning algorithms was pointed out. The first workshop day ended with a practical part, where the participants were asked to define reference classes (one point per class) in QGIS based on the theoretical introduction and on the basis of provided satellite scenes, which included the south eastern section of the Kyritz-Ruppiner Heide, which the Habitat Sampler was to identify in the two following days. 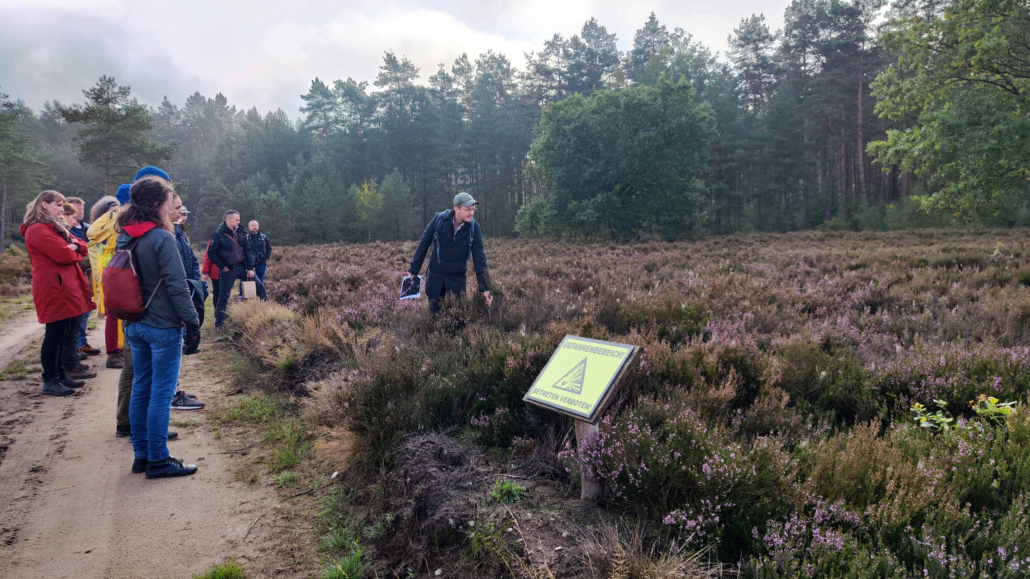 The second day offered a mixture of field experience and intensive practical part. Starting with the first of three R scripts that Dr. Carsten Neumann had compiled, an introduction to the free programming language R, with which the Habitat Sampler can be written and used as R package HaSa, took place. The first script covered importing raster and vector data, intersecting and plotting them, and plotting time series spectra. This was followed by a four-hour field trip to the Kyritz-Ruppiner-Heide, which was shrouded in fog in the beginning. The excursion provided the participants with a better understanding of the successional stages, Calluna life cycles and the management measures implemented there. In the field, the participants were shown different heath formations, the re-sprouting strength of Calluna vulgaris after mowing and fire, as well as problematic areas, i. e. degeneration of heath, grassing and scrub encroachment. The excursion was followed by the work with second R-script, which described the application of the Habitat Sampler. The participants now had several options: They could use their own references defined during the workshop as well as those provided. In addition, there were various satellite datasets provided, which differed in the year of acquisition and area size. Alternatively, they could explore their own study area using their own specified references.

On the third day, the participants continued with the intensive data analysis and used the final R-script for this purpose, with which results could be displayed and exported. The participants’ results finally led to a comparative evaluation and final round, in which they discussed the successes in the designation of the habitats, where difficulties arose and how these could be reduced or avoided. Most participants chose the south eastern section of Kyritz-Ruppiner Heide in 2021 for the application with their self-defined reference classes, including old heath, young heath, heath after fire, heath after mowing, soil, grassland, coniferous and deciduous forest. Among the results were also two own study areas: Once a FFH area characterized by reed, whistling grass meadow, wet meadow, mesophilic grassland and dry grassland, located within the National Natural Monument “Green Belt” on the border of Thuringia and Bavaria. And furthermore an area located in the southeast of the Brazilian National Park Catimbau, which was differentiated into the classes of uncovered soil, sparse vegetation, succession and forest. The workshop ended with a preview of MiSa.C – the Habitat Sampler implemented as a user-friendly gui for users without R knowledge. We would like to thank all participants for their active participation, suggestions and contributions to the discussion.

We may request cookies to be set on your device. We use cookies to let us know when you visit our websites, how you interact with us, to enrich your user experience, and to customize your relationship with our website.

Click on the different category headings to find out more. You can also change some of your preferences. Note that blocking some types of cookies may impact your experience on our websites and the services we are able to offer.

These cookies are strictly necessary to provide you with services available through our website and to use some of its features.

Because these cookies are strictly necessary to deliver the website, refusing them will have impact how our site functions. You always can block or delete cookies by changing your browser settings and force blocking all cookies on this website. But this will always prompt you to accept/refuse cookies when revisiting our site.

We fully respect if you want to refuse cookies but to avoid asking you again and again kindly allow us to store a cookie for that. You are free to opt out any time or opt in for other cookies to get a better experience. If you refuse cookies we will remove all set cookies in our domain.

We provide you with a list of stored cookies on your computer in our domain so you can check what we stored. Due to security reasons we are not able to show or modify cookies from other domains. You can check these in your browser security settings.

We also use different external services like Google Webfonts, Google Maps, and external Video providers. Since these providers may collect personal data like your IP address we allow you to block them here. Please be aware that this might heavily reduce the functionality and appearance of our site. Changes will take effect once you reload the page.